in Before & After, Interiors, Kitchens
by GINNY MACDONALD
0 Comments

Hey there, it’s Ginny here with an intro to a very fun before and after kitchen renovation project for the Lorey family. We’re quite fortunate in that all of our clients are pretty wonderful people, but this family are one in a million and I cannot express how amazing they are. It also helps that they have two insanely cute puppies that happen to love me, so I welcomed any excuse for a site visit.

Nicole & Howard contacted us wanting help re-designing their formal Living Room (reveal coming very soon) and kitchen. The house was built in the late 1930’s and remodeled in the 60’s and the kitchen hadn’t been touched since then. Even the built-in oven was original vintage 1960’s. They wanted the kitchen to be modernized but also liked the idea of bringing in some traditional elements that complimented the history and architecture of the house. 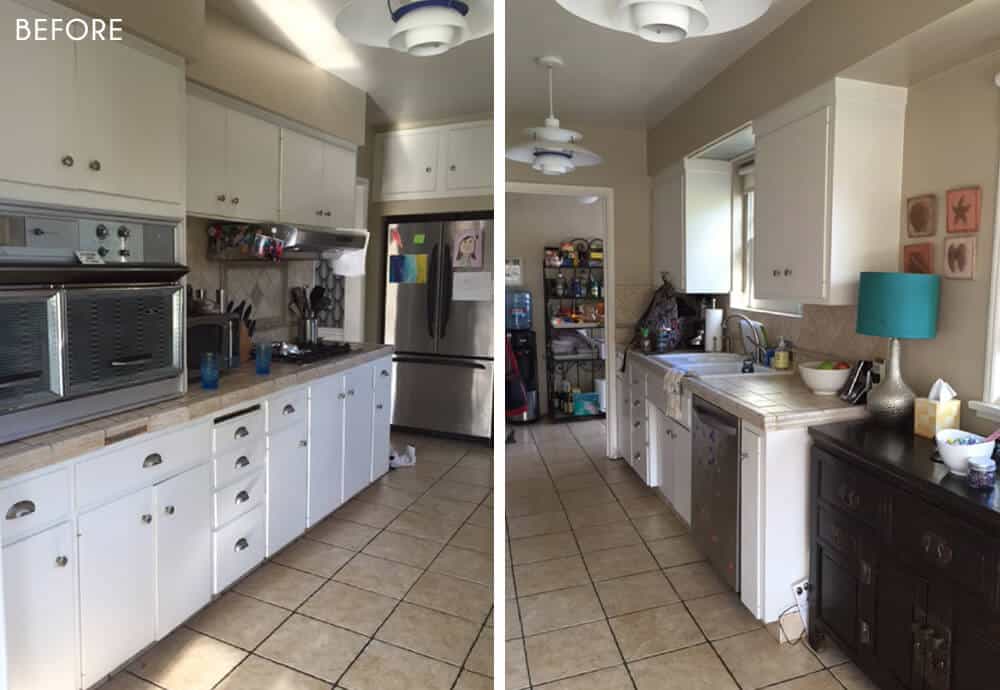 This is what it looked like before we started. The layout was a long galley style kitchen with a separate pantry space at the end. Right from the get go I wanted to push for that wall to be removed so we could make the two spaces into one larger room. Another thought was to remove the soffit above the cabinets and allow the new cabinets to run to the underside of the ceiling. This would make the space feel a lot taller and grander and give more storage space which is always a plus. 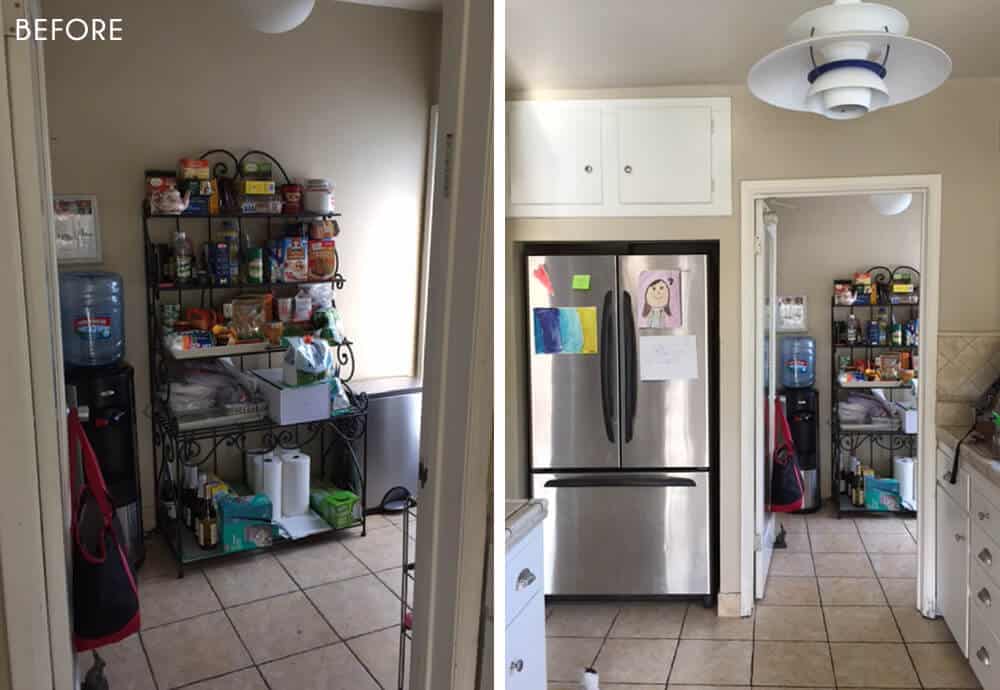 They didn’t have enough space for dry food storage so used an open rack instead (like you see in the picture) – I wanted to create a full height pantry for them with pull out shelves for easy access. And who doesn’t love the idea of a full floor to ceiling height built-in pantry? 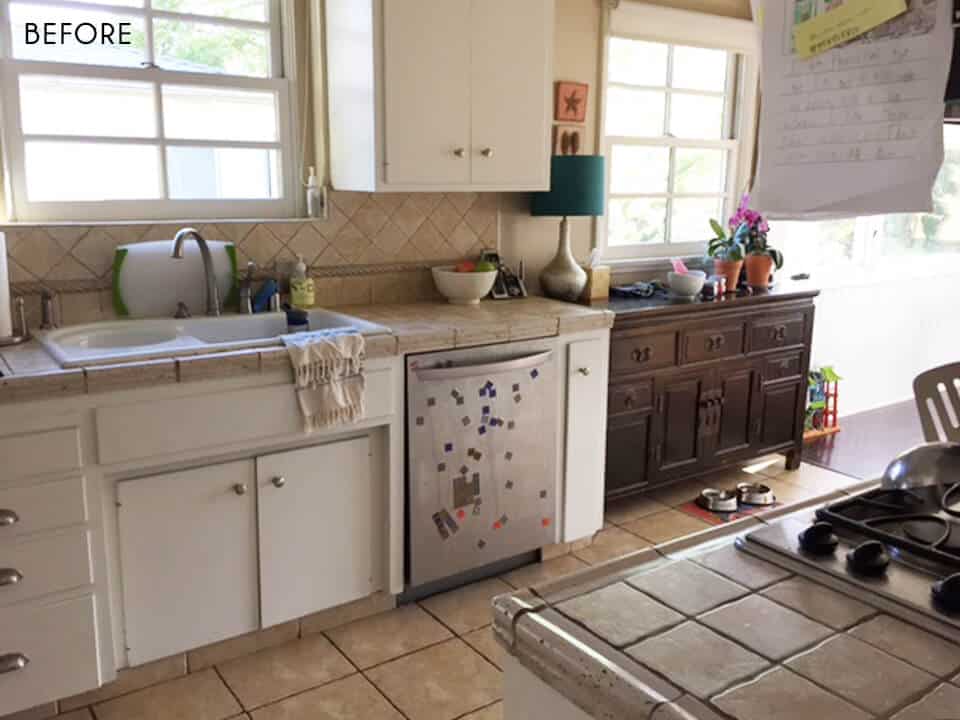 For the most part the main appliances would stay in the same location except for the fridge. They wanted to upgrade their vintage oven and cooktop with a combined 36″ range and I really wanted them to have a farmhouse sink.  I also wanted to extend the lower cabinets to the end of the kitchen to replace the wood buffet since this couldn’t really be used as countertop space. 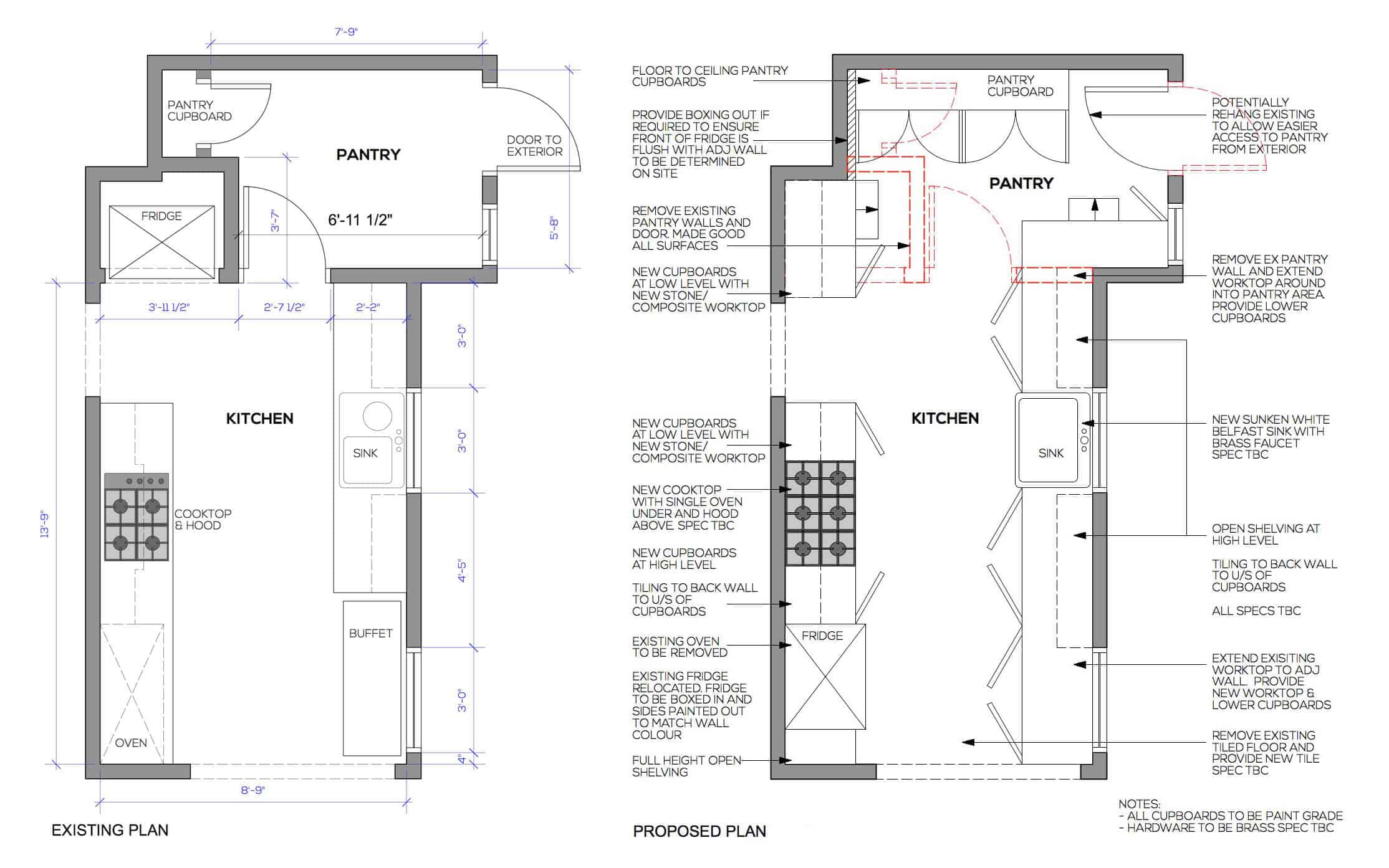 I started off by drawing up the existing layout of the kitchen (which you see on the left above) and then drew up some proposed options for contractors to price off (which is on the right). We had 5 different contractors bid, some we’d worked with before and others that had been recommended. That way we could have a range of figures to present to the Lorey’s. We ultimately went with a mid-range price contractor Mega Builders that had been recommended by a co-worker of Howard. I’ll be honest, I was skeptical at first, there was something personality-wise that didn’t quite sit well with me. I think I’m also a tough crowd to please with my hard English ways. But it’s always a risk working with new contractors, especially on expensive projects like this and you really want to make sure they’re the right fit. It’s also our responsibility as the designer to have your client’s best interests at heart, so I was being uber cautious on their behalf. But as it turned out they are amazing, they also work with crazy good carpenters that custom made the kitchen (these guys are also doing Emily’s new house). 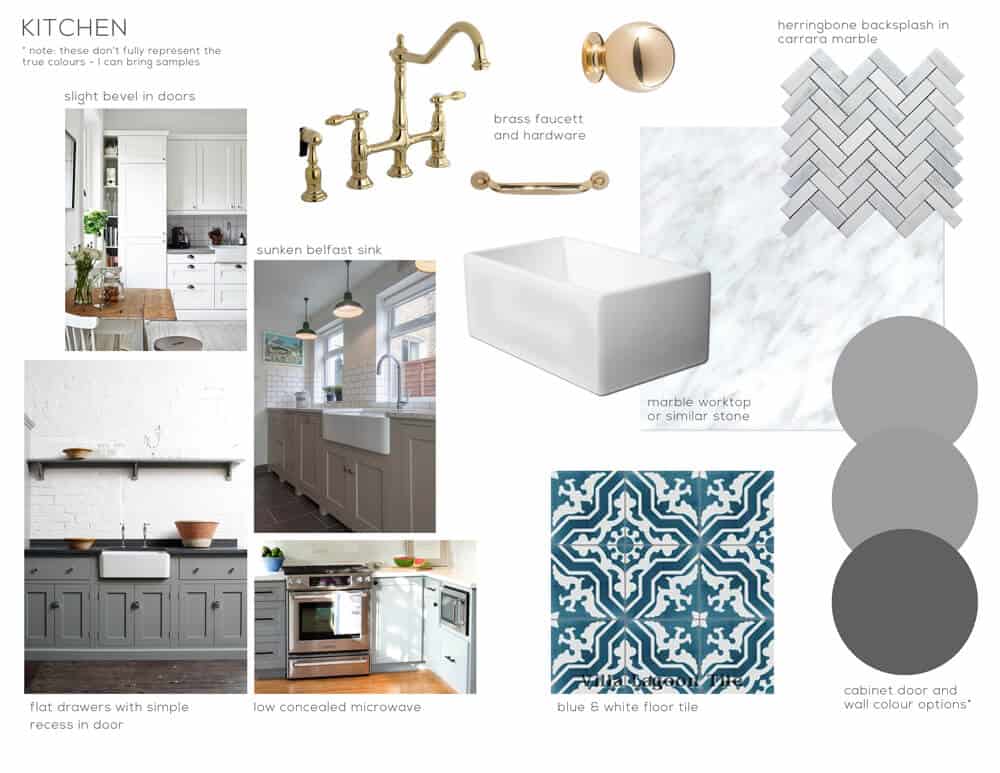 I started to pull together some moodboards and design inspiration. I took a lot of design styling from those amazing Brits over at Devol. Their style cabinets felt right for the house: modern with traditional craftsmanship. We started this just as the cement tile craze was getting bigger so we liked the idea of bringing a blue version of that in for the floor. I liked the idea of mixing the blue flooring with a grey cabinet with a simple herringbone backsplash and marble countertop. They love brass tones so we knew we wanted to go down the polished brass route. And although it’s super trendy right now, brass still has a timeless feel to it that will be around for years. But it wasn’t until we received a ton of tile samples that we ended up going in a slightly different route which you’ll see further down. 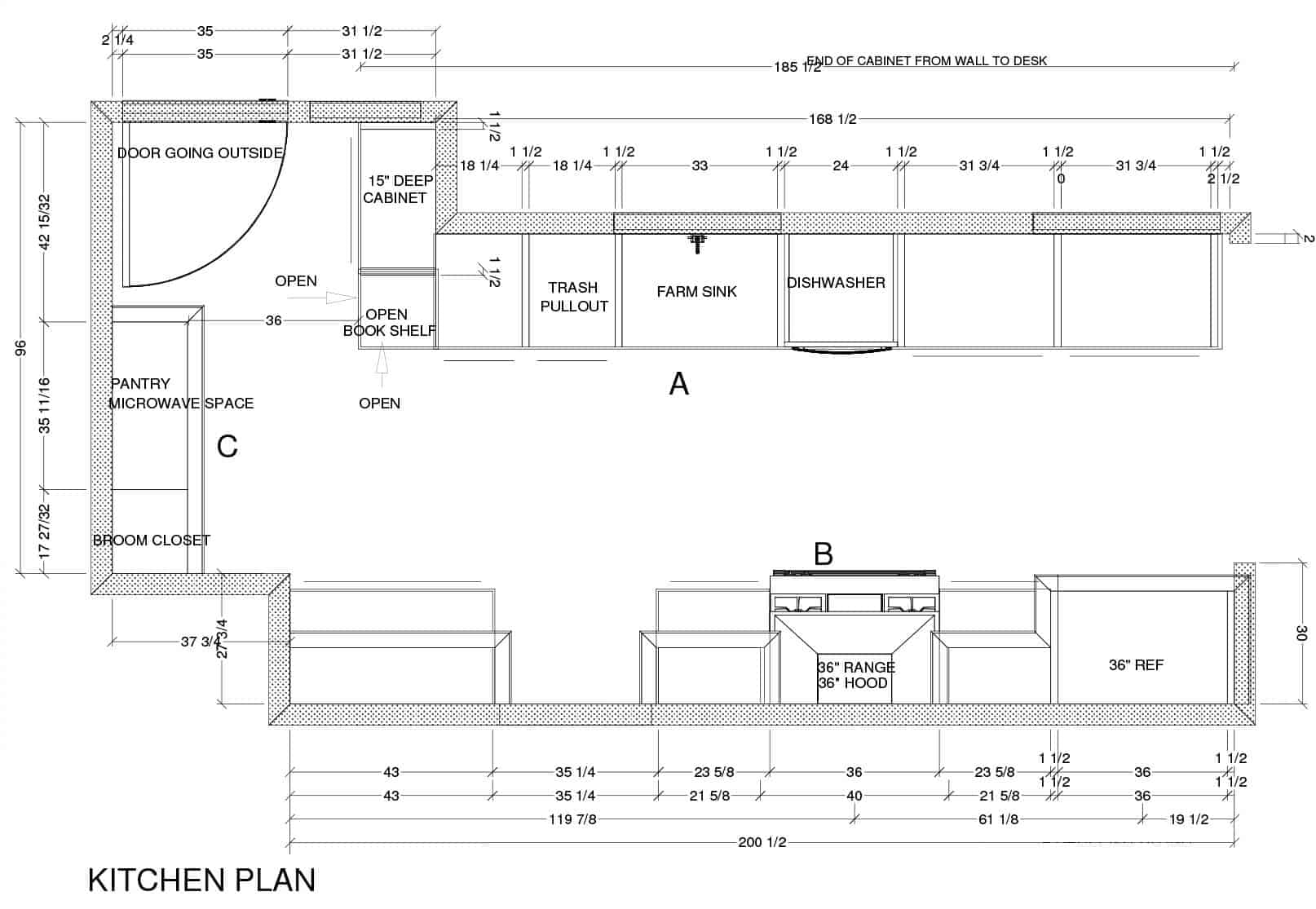 The carpenters got to work on drawing up the layout based on my plans. These were the final signed off drawings since there were a few revisions during the process. We went down the fully custom route with this kitchen (I talked a lot here about the differences between custom vs pre-fab). 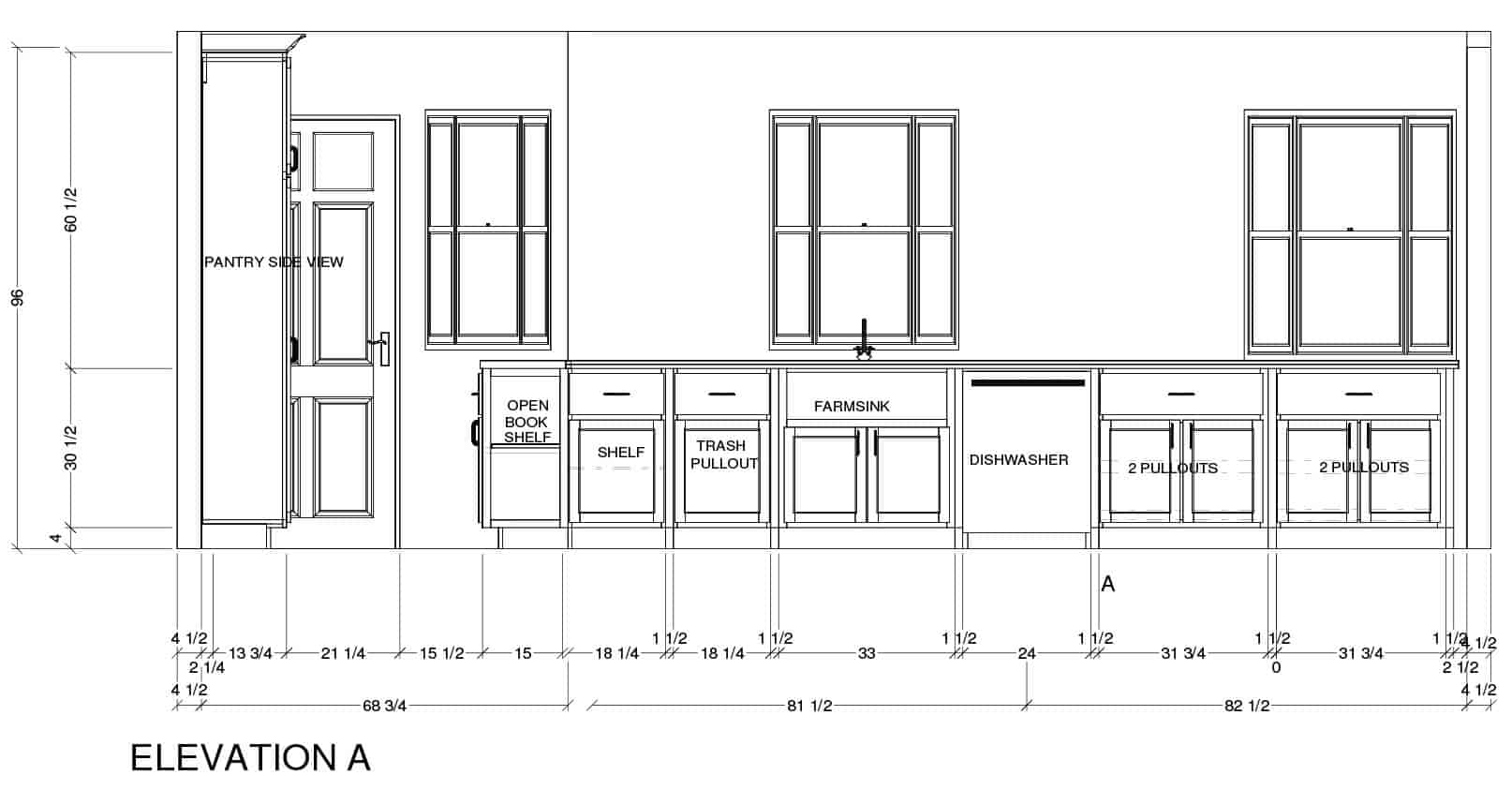 We proposed to remove the upper cabinets from either side of the sink and replace with open shelving, we liked the idea of keeping that wall open and light yet still functional. You can see that we opened up the pantry space and moved the fridge (shelves not shown on here). We went with inset panels with a frame for a more traditional custom feel. The only downside to inset is that you do lose some interior cabinet space. Not a ton, but something to think about when you’re doing this kind of cabinetry. 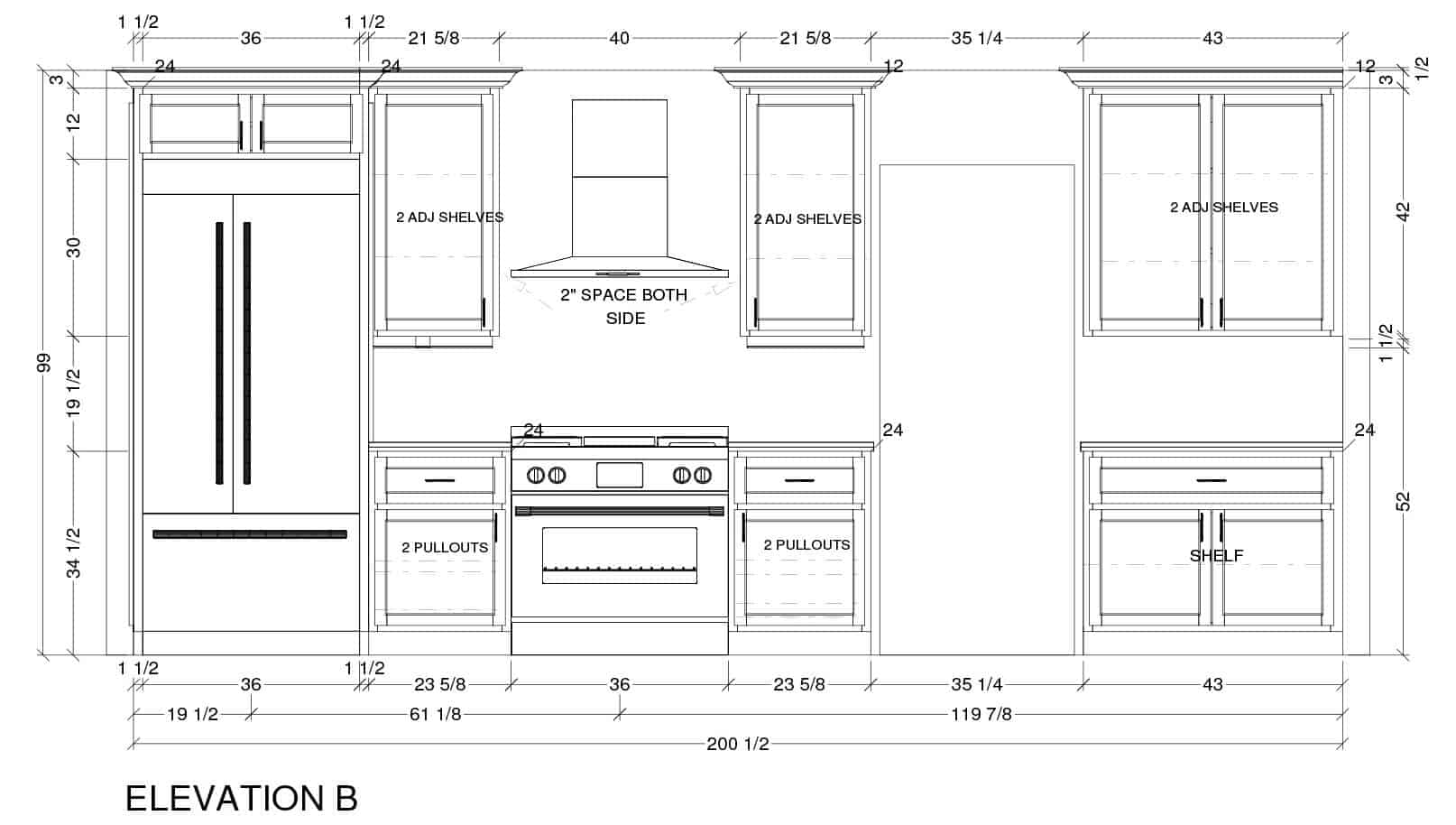 We relocated the fridge so that it was more tucked in the corner and didn’t overpower the entrance into the kitchen from the dining room. 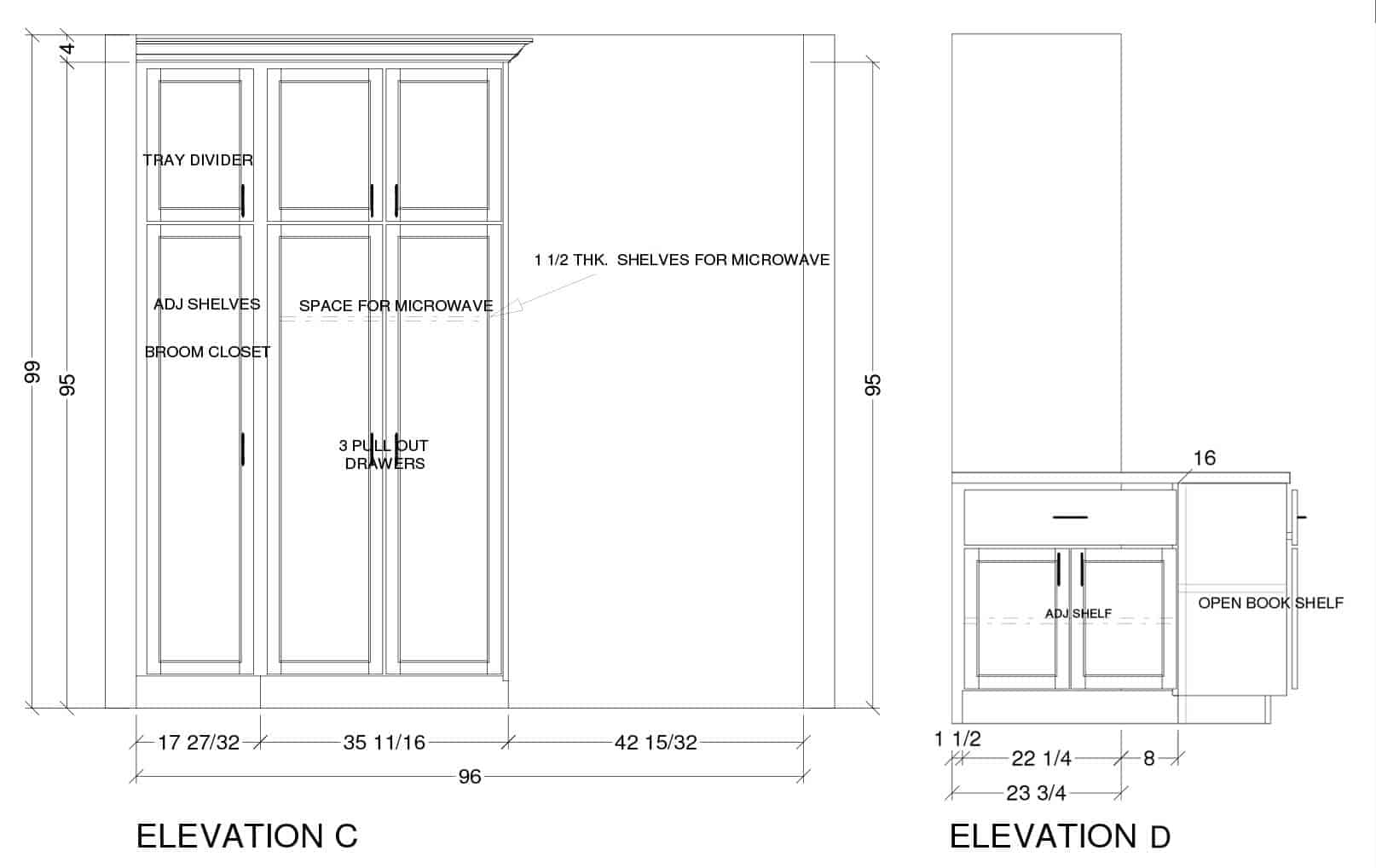 We did a three door full height pantry. One for utility storage and then a double for food storage and a place for them to hide their microwave. We toyed with the idea of putting the microwave in one of the lower cabinets but I didn’t love the idea of having it on show and ruin the aesthetic of the cabinets. Both Howard and I were on the same page even though the carpenters were trying to convince us to buy an all-singing all-dancing microwave drawer. I totally get that they are amazing and have their functions but they can be a bit of an eyesore (in my opinion and Howard agreed). 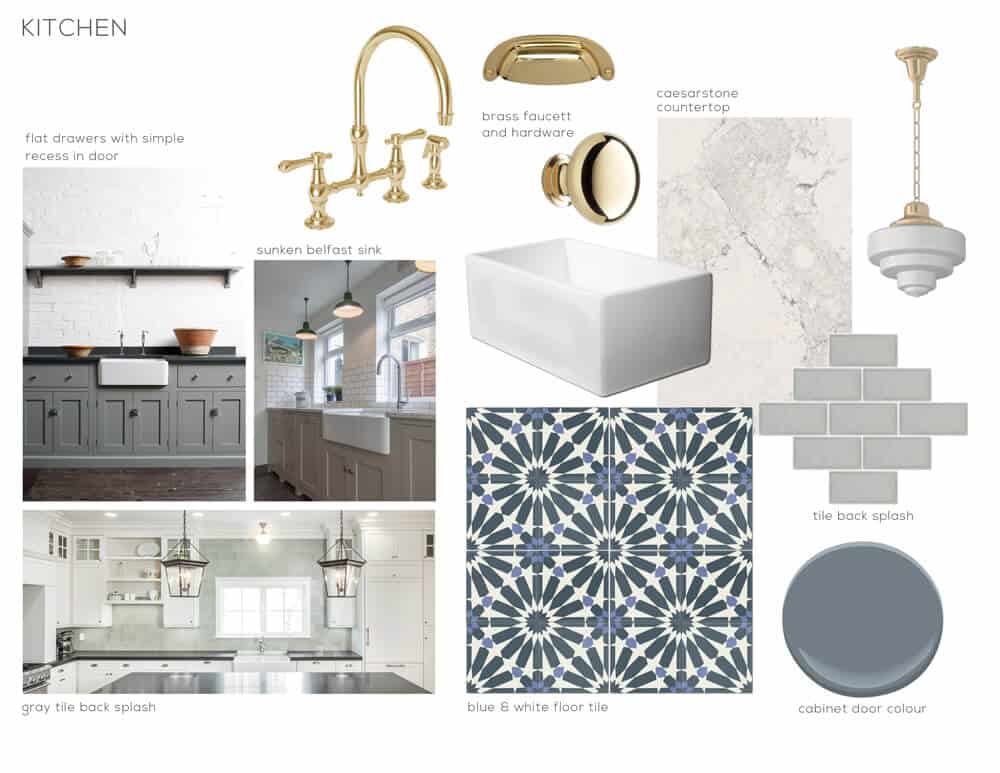 One thing about the Lorey’s – they aren’t afraid to go bold and love color and pattern. So once we got all the tile samples in we instantly fell in love the Big Al from Cle Tile. That really was the starting off point for the rest of the finishes. We ended up changing the backsplash to beautiful, simple, hand-made tile from Fireclay in Blue Spruce. And since the floor tile had pretty tones of blue we opted for a blue-grey cabinet color – Wolf Gray by Benjamin Moore. I was pretty adamant that the finishes of the faucet and the hardware match – unless the metals are totally different i.e. oil rubbed bronze and brass, I’m not a lover of combining different tones of brass since they can vary so much between companies. I sourced the faucet which is b-e-a-u-t-i-f-u-l from Newport brass and Rejuvenation’s hardware matches super well with it – bin pull & cabinet knob.  The pendants are also from Rejuvenation (Baldwin 6″ polished brass with 12in. Deco Stepped Shade). 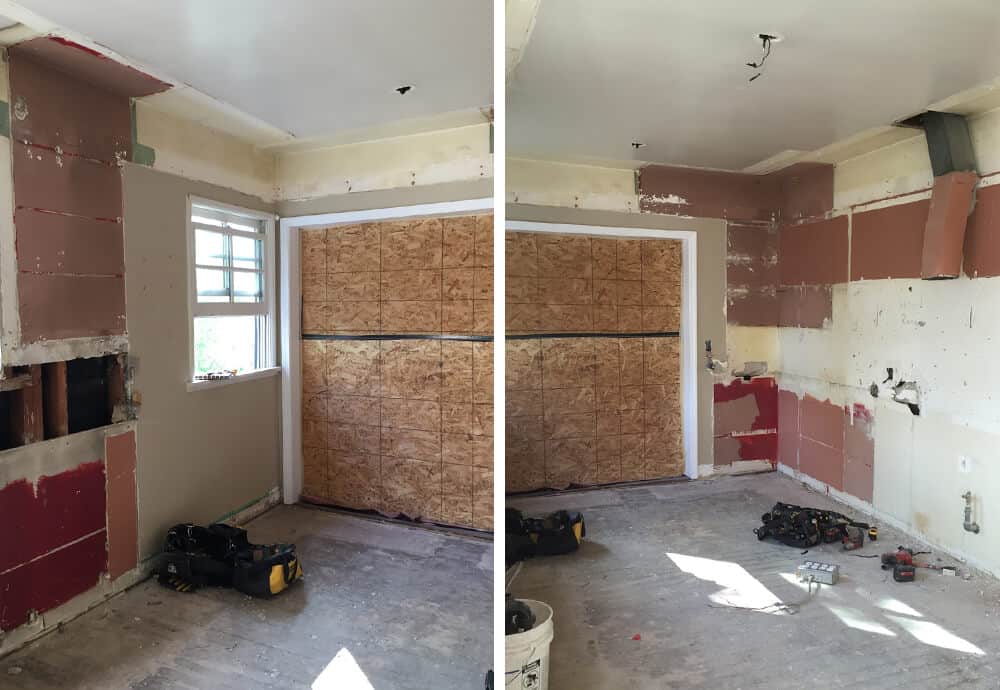 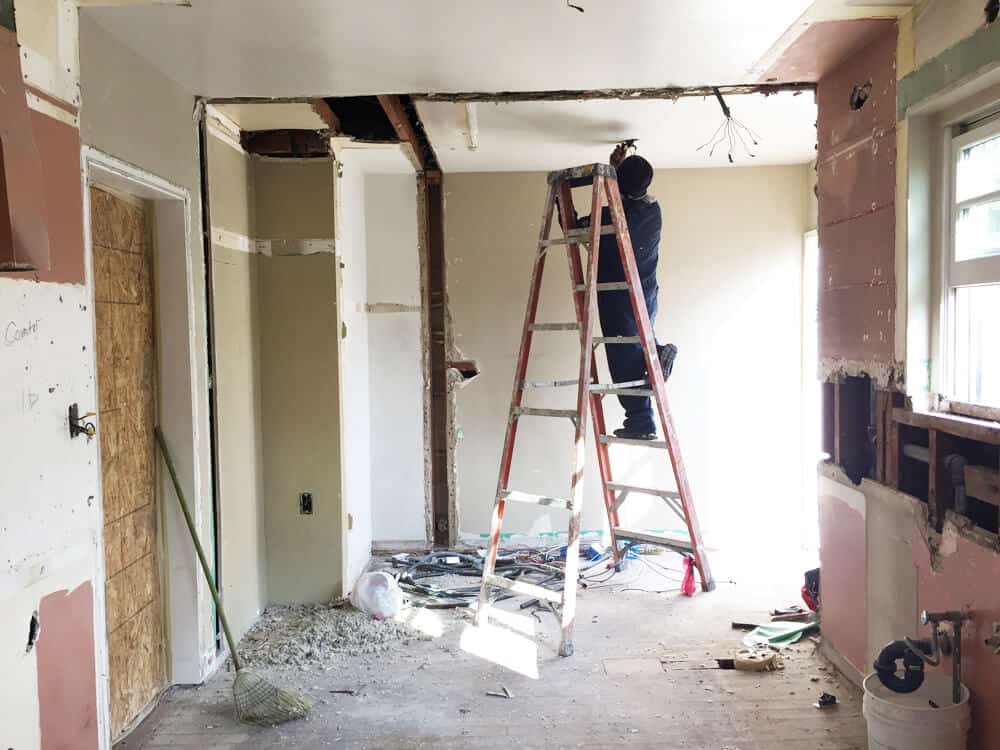 As soon as we got the drawings signed off and had received all the finishes, they got to work on doing the demo and removing the existing walls. Luckily the kitchen is accessible from the outside so they could close off the doorways which helped to prevent dust getting into the family and dining room. 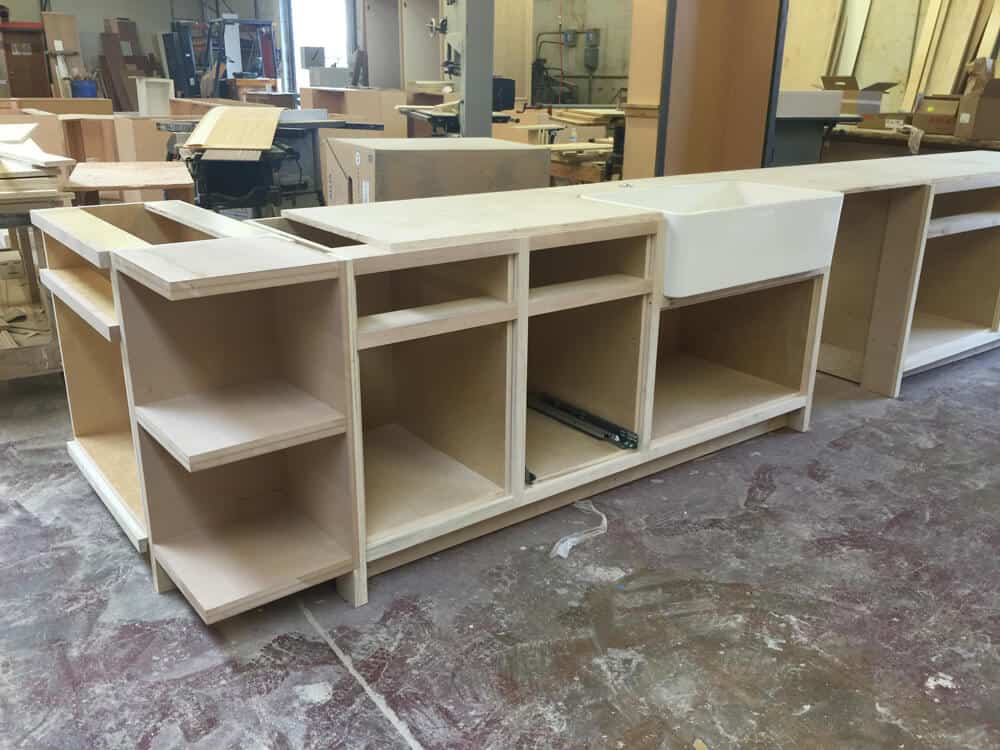 Since there was some demo work required the cabinets could be made off site in the workshop which is great because you can go and see the progress in person and make any small tweaks. 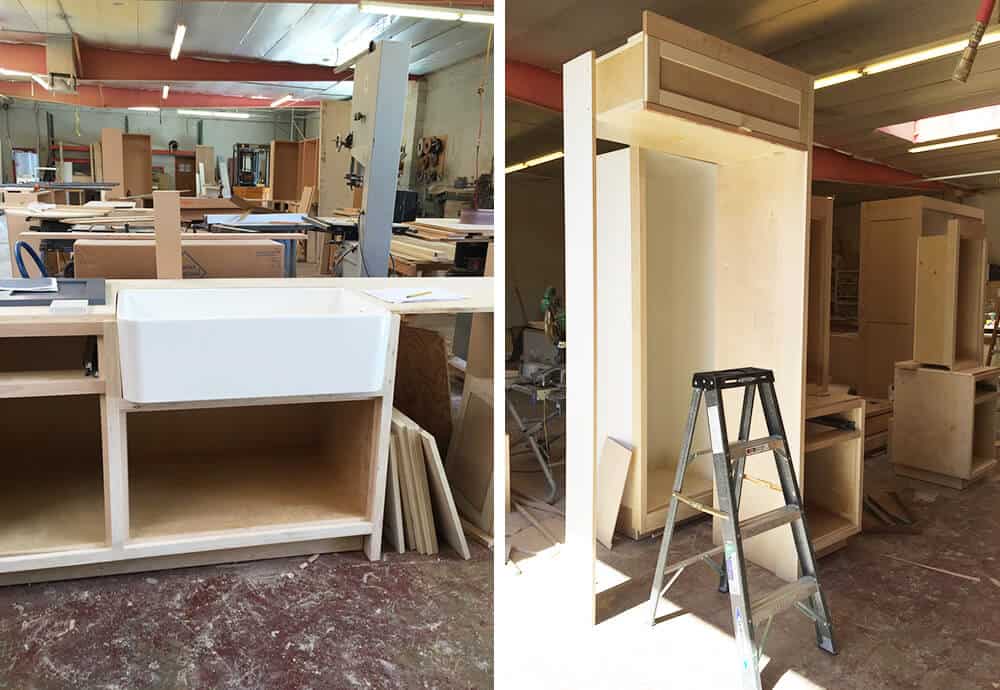 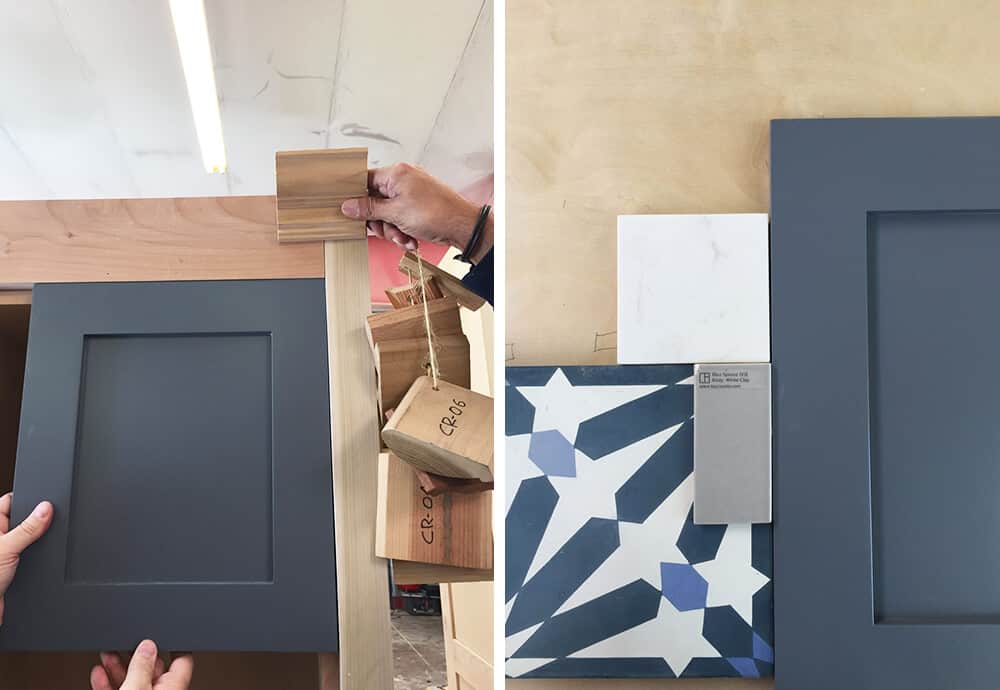 We also approved the paint sample for the door and discussed moulding details for the ceiling – which we ended up custom designing since none of the ones they had really sang out to us. 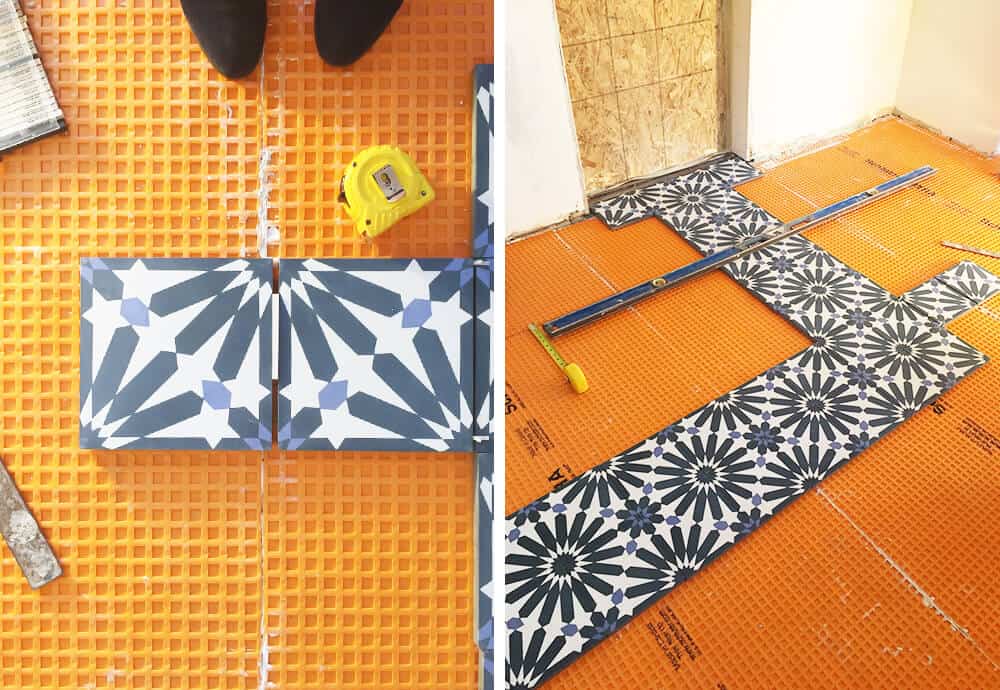 Back at the house after plumbing, electrical, drywall and all the other boring, yet vital things were going on the floor tile could be installed. Our contractor prefers to install everything on top of the finished floor so we installed it throughout. Since the tile has a definitive pattern we laid it out based on the walkways in the room, it’s small details like this that can really throw off the design if it isn’t considered properly. 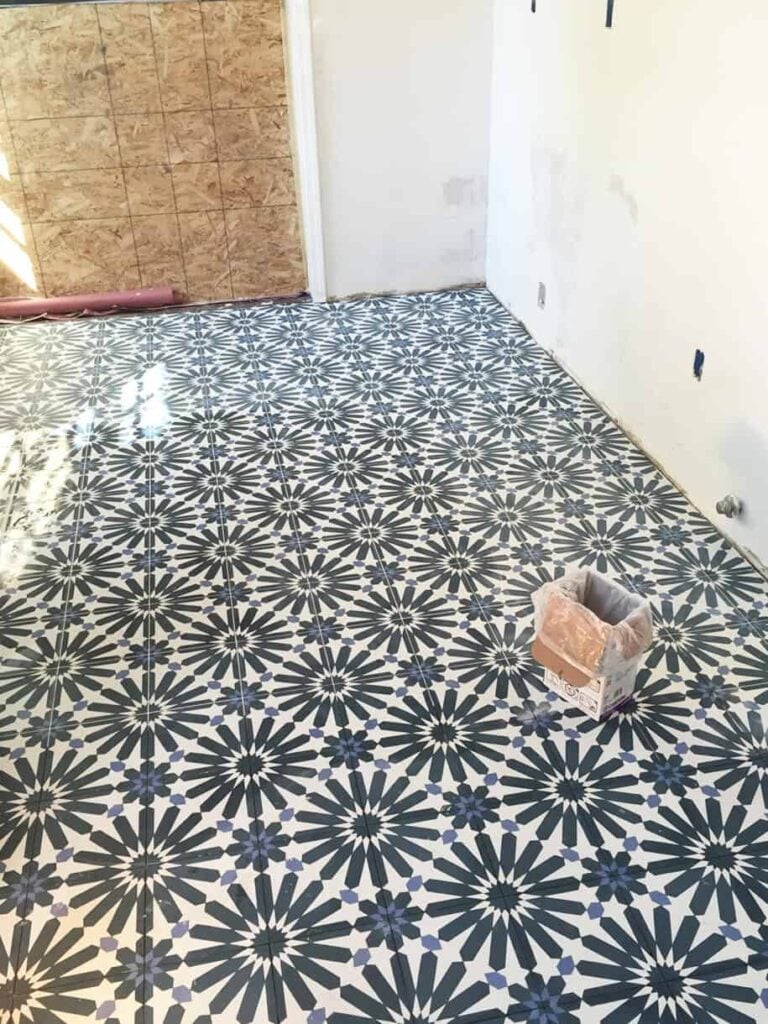 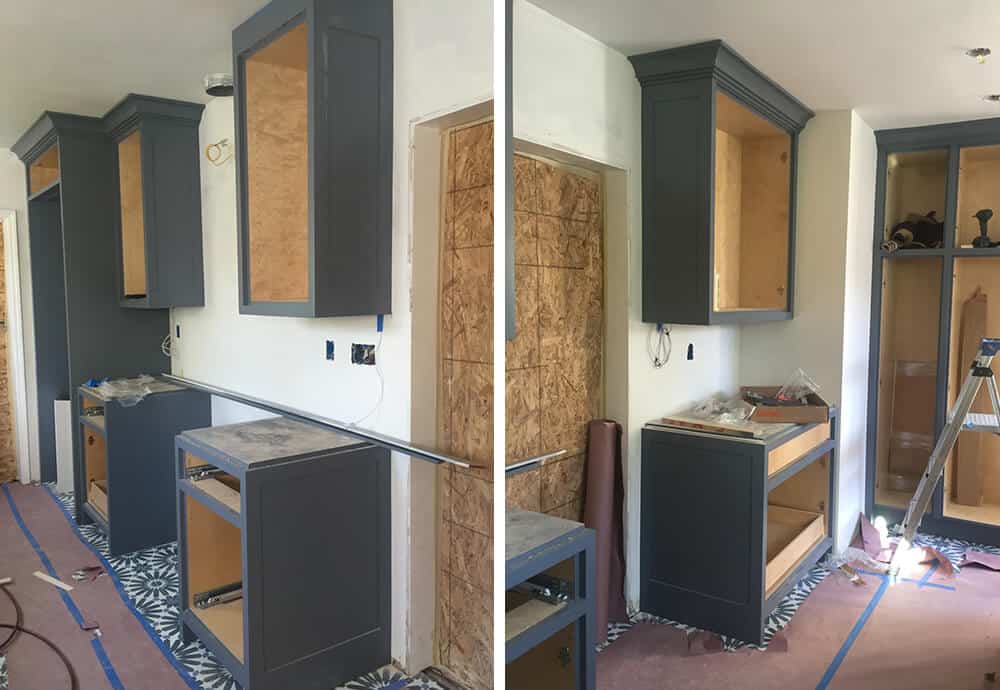 Once the tile had gone in they installed all the cabinets, then doors, hardware, cabinets, tiles, lighting, appliances… you get the gist.  The last thing to go in was the open shelving and then it came to styling it out for them. Which we did and you can see a sneak peek below. Stay tuned though, we’re doing the full reveal of this bad boy sometime next week, I just gotta get ’round to writing about it first. 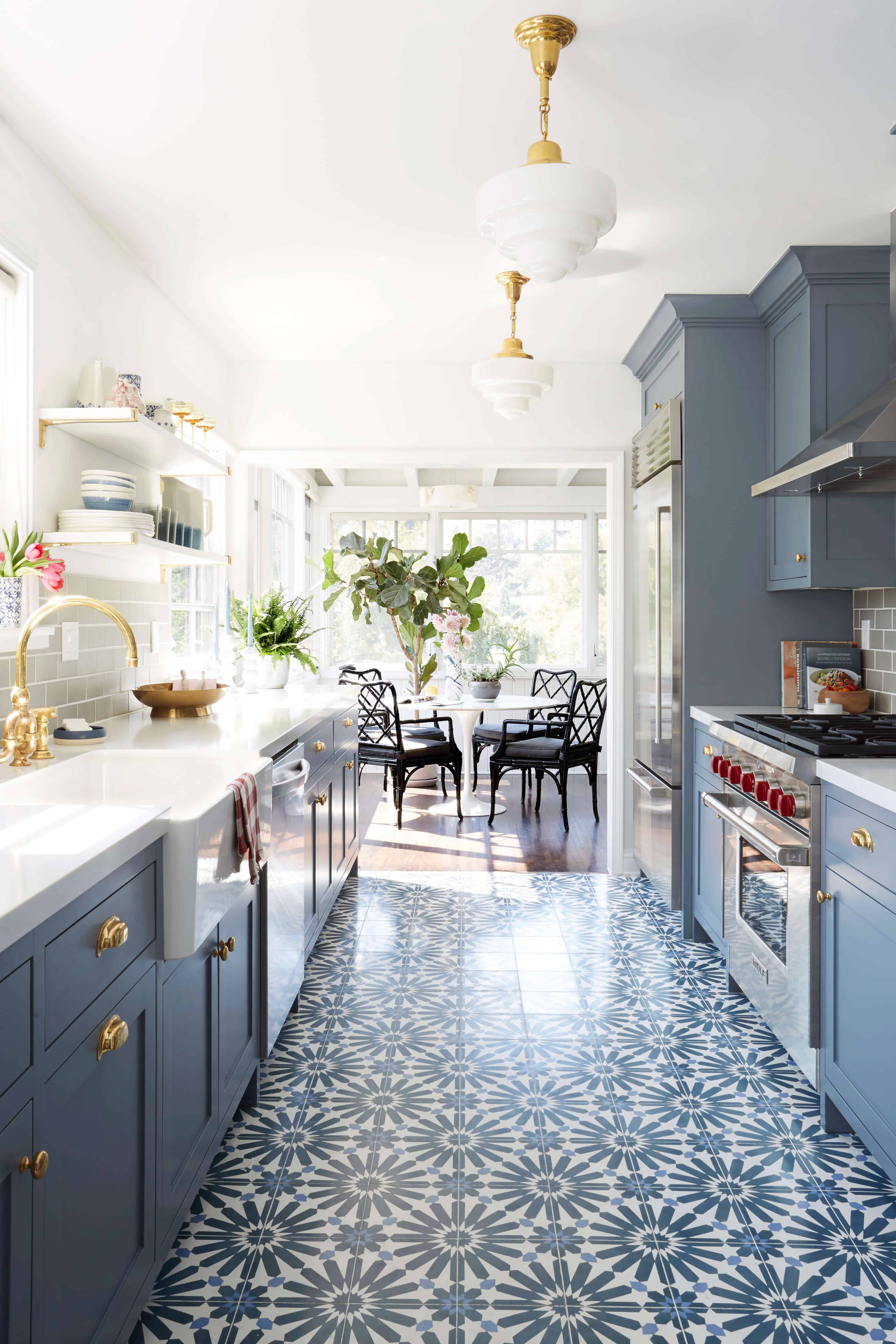